Excerpt from the 1994 Annual Report

In 1940, Dr. Olive Erickson, a practicing pediatrician whose home and office was on 19th Ave. and Quintara and a member of Norwegian Lutheran Church on Dolores Street [now Golden Gate Lutheran], felt that the children in the Sunset-Parkside area should have a Sunday School closer to home.  Through her efforts, a new Sunday School was formed as an extension of Norwegian Lutheran Church School and met in Dr. Olive's home with financing from the Norwegian Lutheran Church and the blessing of its pastor.  In 1941 an extension kindergarten was started in Westwood Park district besides the classes meeting in the Erickson home.  When the group outgrew Dr. Olive's home, they rented the St. Francis Episcopal Church Parish House.  The fledgling church and school really wanted to hold services on Sunday's rather than in the middle of the week so they then rented a vacant store at 22nd Ave. and Vicente St.  This new church was called Parkside Lutheran Church.  Opening services were held on November 28, 1944. 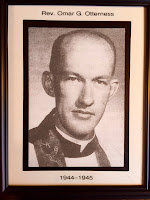 The Rev. Omar Otterness was installed as its first pastor on January 28, 1945.  In February the name of the church was changed to Grace Evangelical Lutheran Church.  Feeling they would need a permanent home in the future, they contacted the United Mission Advance for a loan to purchase the land, a parsonage, and a building.

The search for a suitable site began and an empty corner lot measuring 100 feet x 100 feet was found at 33rd Ave. and Ulloa.  Problem: the lot was a sand hill rising 100 feet in the air and known to kids in the neighborhood as the "greatest sliding hill in these parts", but, to the parents, it meant misery! 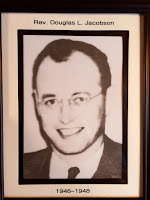 This mountain of sand was purchased as Grace's permanent hoped-for home.  Shortly thereafter enough sand was cleared from the corner to erect a metal post-war barracks building.  Grace now had its first home on its own property.  It was dedicated on March 2, 1947.  Rev. D.L. Jacobsen was the pastor.

Rainy winter days were a problem.  The rain beat a loud staccato on the metal roof and just about drowned out the music, the service, and the sermon.  It became a contest to see who could sing louder or speak louder so as to be heard above the din!  Another problem was the heat: cold winter nights made the barracks into a freezer.  It became necessary for someone to run up to the corner and turn the one heater on early in the morning in the hope that the chill would be gone by 9:30.  The barracks was a real challenge.  There were Easter and Christmas programs, confirmation classes the Church Women's meetings and a host of other activities which found a meeting place there, including Cub Scouts, Boy Scouts, Brownies, Girl Scouts, PTA Meetings, Nursery School, Dinners, Luncheons, etc.  Grace continued to grow and soon spilled over to the neighboring homes to accommodate the increasing number of Sunday School children, church members, and community meetings.   The Carlsen's home became an extension of the growing church.  Classes were held there, the kitchen was a real necessity for the dinners and coffee hours, and the garage with all its woodworking tools came in handy.  The Dietrich's home on Ulloa was also used for Sunday School as well as another home down the street.  The barracks building began to burst at the seams! 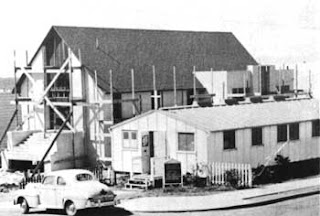 Finally, with much held, large dump trucks and strong backs, the sand was removed from the entire hill and the first real structure was designed.  No more sand!  Parents were ecstatic -- not so the kids who lost the "greatest sliding hill that ever was."  This was a time of very close relationships at Grace -- the men worked on their days off and weekends to help build and the women brought in hot lunches and snacks for the men.  All worked very hard to build Grace.  The church erected with so much love and fellowship was finally ready and was dedicated on May 1, 1949.  So much was accomplished in 9 short years.

In 1960, Grace as we know it today was completed.  It was dedicated on December 11, 1960.  The mosaic above the altar was designated and made by Margaret Baker Sarris using pebbles gathered from California beaches over a two year period by members of the congregation.  Margaret was an artist in her own right and our mosaic has been recognized as outstanding art.  Our church's sacred walls echo the names of so many who were the early members and so instrumental in its growth: those who help found the church and all the early members; all who have come into its folds over these many years; its pastors who have contributed so much; the organists and choirs who gave and are giving unselfishly of their special gifts; those who served and serve as teachers, officers, committee members, and in so many other ways; and our youth and children who are our church's future.  We remember the births, baptisms, confirmations, weddings and with sadness the memorial and funeral services for loved ones.

Grace has continued to be a beacon for all.  It has always been open to the community for so many wonderful things.  The first 50 years... may Grace celebrate another 50 with the same love, patience, joy and peace.

Submitted respectfully and with love by Marion Carlsen