Join us for a few picture days at Grace.  Everyone who comes to get their picture taken will get a free print and a collection of photos of our congregation will be hung in Brotherhood Hall and celebrate not only our members, but also the families of the Grace Infant Care Center.
Photo Days:

(please come to at least one, this is an important evangelism project)
If you are traveling during the picture days listed above, Pastor Megan will work with you to attend a picture day at one of the other SF CARES activities, so we can get everyone up on the wall.

Pastor Megan will also be using the photos in future projects to invite new members to join our church so please plan to attend at least one of the picture days!
Posted by Rev. Dr. Megan Rohrer at 11:10 AM No comments:

Email ThisBlogThis!Share to TwitterShare to FacebookShare to Pinterest
Labels: events 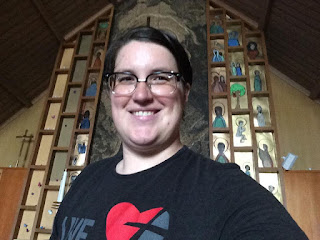 Pastor Megan painted some more icons for our altar.  Here is who's who of the saints on the right hand side (or the Greek Testament side).

In the center column:

Prophetess Anna  (icon to the left) is considered by some to be the last of the line of prophets.  Anna is the person who finds young Jesus in the temple when he gets lost.  Either an 84 year old widow or an woman who was at least 105, who had been a widow for 84 years. Regardless, Anna was a faithful Jewish woman who regularly prayed and fasted.

Martha and Mary (icon to the right) are the sisters of Lazaras.  Martha (on the left) is depicted as following the traditional roles of woman and fulfilling the hospitality laws when Jesus comes to visit.  Martah is depicted in traditional garb to symbolize her rule following nature.  Mary (on the right) has her hair down, to remind us of the story where she is said to be washing Jesus' feet and anointing him for burial.

Zacchaeus was a short man who couldn't see Jesus over the crowd, so he climbed up into a tree.  It's also possible that Zacchaeus was in the tree because as a tax collector, he would have been despised by most people in his community.  Jesus tells him to come down from the tree and Jesus went with him to his house.  Order a signed wood print.

The Naked Guy is perhaps one of the most faithful characters in the Gospel of Mark.  It is possible that this is the rich younger ruler whom Jesus tells to sell all of his possessions.  The naked guy becomes naked when the soldiers come to take away Jesus and someone grabs the cloth he was wearing as he ran away.  In the tomb after Jesus is resurrected, a young man in a white cloth is there to tell the women that Jesus already left.  Did the naked man get there first?

Thecla was a woman who heard the teachings of Paul and decided to follow him.  Thecla's mother did not like the vow of celibacy that Paul was asking people to take and betrothed Thecla for marriage.  When Thecla refused, her mother had her burned at the stake, but she did not burn.  Thecla leaves her family, cuts her hair and dresses as a boy.  She follows Paul as his ministry continues.

In the right column:

The Samaritan Woman at the Well  (icon to the left) is a women of scandalous background.  Having been married several times, she is currently living with a man that she is not married to.  When she meets Jesus at the well she tells him about the Messiah who is going to bring living water.  Painted with a curvy, but aged figure, this icon is painted to highlight the reason approaching a sultry stranger would have been noticed by the neighbors.

Legion (icon to the right) an allegory predicting the defeat of the Roman army, Legion is a story in Mark's gospel of an individuals with mental health issues getting help from Jesus.This icon depicts Legion tied up and finger prints on his body, to make it look like there are demons trying to claw their way out of his body.  This icon is a reminder that God is with individuals who struggle with mental health issues.  Order a signed wood print.

Lazarus (icon to the left) is the brother of Mary and Martha and a friend of Jesus.  Some wonder if he is the beloved disciple mentioned in the Gospel of John.  Lazarus is painted to look like a cross between a mummy and a zombie to remind us of the time Jesus raised him from the dead.  Lazarus is the only saint to have two halos, because he died twice.  Order a signed wood print.

The Bleeding Woman (icon to the right)is known for reaching out and touching the hem of Jesus' cloak.  After doctors are unable to solve her problem, the bleeding woman ends 30 years of bleeding by taking her health into her own hands.  The bleeding woman is the only saint is turned to face Jesus.  Order a signed wood print.

Titus (icon on the left) was a companion of Paul who raised money for the poor.  Rising to the rank of Bishop,

Priscilla and Aquila (icon on the right) A couple that traveled with Paul, Priscilla is known as one of the first preachers and teachers of the Gospel and is the only known female writer of a book of the Bible (Hebrews).  Aquila is said to have been made a Bishop by Paul. 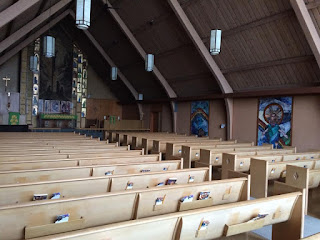