A Welcome From Pastor Megan:
If you are thinking about worshiping with us at Grace, know that I don't care if you know when to stand up or sit down or if you don't have perfect attendance.  While there are many congregations that have a larger attendance on Sunday, Grace has heart and an amazing coffee hour.  Unlike other churches who may be set in their ways, we're open to new ideas, new visitors and you can really make a difference here.

If you want to sit in the back and sneak in and out without talking to anyone, that's ok too.  We welcome all, no matter what motivates you to join us (in person or online ) Sundays at 10:30 am PST. 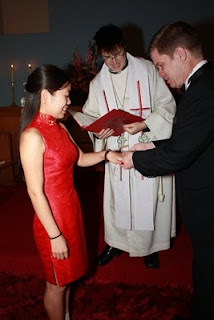 
Megan has been the Executive Director of The Welcome since June of 2002 and was called to this ministry by a joint call from herchurch (Ebenezer Lutheran), Christ Church Lutheran, St. Fracis Lutheran and Sts. Mary and Martha Lutheran.  Megan was also called to serve as an Associate Pastor at St. Aidan's Episcopal Church.

In 2011, Megan was awarded an Honorary Doctorate for her work as Executive Director of Welcome, with the chronically homeless in San Francisco.  At Welcome, Megan has created several innovative programs that have enabled more than 150 homeless individuals to move indoors and stay there.  The Homeless Identification Project and the Urban Share Community Gardening Project have received the most attention.  The Urban Share project enabled 6 church owned properties across the Bay Area to be transformed in to community gardens.  One site, the Free Farm on the former site of St. Paulus Church was able to provide 3,221 pounds of free food to local residents in its first year.  Megan has also worked in the secular world at Project Homeless Connect where she managed the Growing Home Community Garden, founded SF Refresh (a program that creates opportunities at urban agricultural sites citywide for individuals with mental health issues to receive free skill share and employment skills) and served at the Resources and Providers Coordinator and created a denture and vision program for the Every Day Connect program.  Megan is passionate about finding creative ways for individuals, communities, the City of San Francisco and congregations to respond to poverty.

Community of Travelers
Megan served as co-pastor, with Tommy Dillon, of the Community of Travelers from 2010-2012 at St. Aidan's Episcopal Church in San Francisco's Diamond Heights.  "Community of Travelers" was a group of folks figuring out how to be a liturgical, Christo-centric, social justice oriented, incarnational, contemplative, irreverent, ancient- future church with a progressive but deeply rooted theological imagination.

Following in the spirit of Martin Luther, who rewrote the lyrics to pub songs to create contemporary hymns, Megan is creating a series of Vespers services from the tunes from popular music. So far, Megan has debuted a Beatles Mass, Bob Dylan Folk Mass, a Lady Gaga Mass.  The Gospel According to Pop is a series of video meditations, Megan created to illuminate stories from scripture.  Each video features a pop song performed by Megan and a series of images pertaining to the scripture.Megan has created special Gospel According to Pop Liturgies for Lent and an '80s Easter Mass.

In the first 5 months of this service, it increased attendance in the church by an average of 46 a week and resulted in two adult baptisms. Gaga Mass has traveled to New York, Long Island and Portland to raise money for local programs from homeless LGBTQ youth. 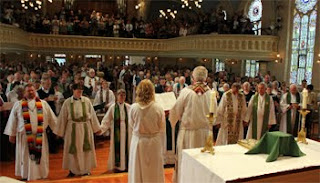 Refusing to obey the unjust policies of the Evangelical Lutheran Church in America's (ELCA) policies against gay, lesbian, bisexual, transgender and queer individuals, Pastor Megan was ordained Extraordinarily on November 18, 2006. Rostered by Extraordinary Lutheran Ministries, Megan served on the organizations Covenant Circle as Director of Communications and as Director of Candidacy.

On July 25, 2010 Megan was one of 7 GLBT pastors in the San Francisco Bay Area who were previously barred from serving the church who were received/reinstated to the roster of the ELCA.  This service was the first of its kind and received national media attention.  Learn more on the blog for this service.

The first openly transgender Lutheran pastor ordained in the United States, Pastor Megan has worked with the Human Rights Campaign to create resources for congregations as an author and educator.