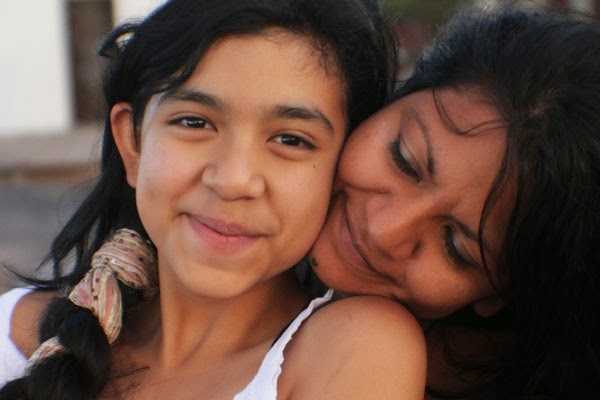 
After fifteen years of living undocumented in the U.S., Vanessa Torrez finds herself stuck in Mexico when visiting her dying mother, and the entire Torrez family moves to Nogales, Sonora, committed to staying together. With teenage Kimberly crossing the border each day to go to school in the United States, her father, Rick, finds himself unemployed, stricken with Hepatitis C, and in dire need of a liver transplant. Meanwhile, Vanessa awaits the visa that will allow her to live in the U.S. with her American children if her husband dies. Told through the eyes of teenage Kimberly, Life on the Line illuminates the changing face of America through the story of this one family.

Jen Gilomen, Co-Director and Cinematographer, and Sally Rubin, Co-Director and Editor, are a lean filmmaking team. After working on numerous documentary and new media projects separately, they completed their first nationally-distributed documentary, “Deep Down,” in 2010. “Deep Down” was broadcast nationally on the PBS Series Independent Lens, screened in over 200 communities via ITVS’s Community Cinema program and other festivals, is distributed by ITVS and New Day Films, and participated in the U.S. State Department’s American Documentary Showcase program, reaching audiences from Kentucky to Belarus. “Deep Down” was a transmedia project employing deep online engagement strategies that included the Virtual Mine, an interactive virtual reality game funded by ITVS and MacArthur Foundation. “Deep Down” and the Virtual Mine garnered an Emmy nomination in the category of New Approaches to News and Documentary in 2011.

In directing "Life on the Line," we enjoyed learning about a topic that is totally relevant to our lives and to the lives of so many here in Los Angeles and San Francisco, where we're based. Los Angeles is 51% Latino, and both here and in Orange County we're not far from the border. We live in communities that are largely Mexican, Salvadorean, and Guatamalan, and learning first-hand about some of the issues that most affect these populations was extremely eye-opening. Getting to spend almost three years traveling off and on to the border region to delve into the lives of teens, and in particular teenage girls, was rewarding, educational, and fun.
We've now screened in several other states (and countries, including at the Mexico International Film Festival where we won an award), and the film has been well-received amongst a diverse set of audiences. Kids, in particular, resonate with the film, as do immigrant populations of a variety of backgrounds and nationalities. Anyone who comes from a mixed-culture or has a mixed identity (which includes the vast majority of Americans) tends to connect with the film.
As far as outreach, we are aiming to reach over 1 million people through our broadcast and outreach effort. We hope that the film, through its broadcast, reaches viewers who would not otherwise have seen the film, and ideally impacts people who previously felt no connection to the issue of immigration. Our goal with the film was to put a human face on a traditionally faceless issue; an issue that's divisive, that's in the news often more around policy and legislation rather than through an emphasis on the lives actually touched by these policies. Our film aims to put a name and a face to the abstract stories that one hears about immigration. So our hope us that viewers are affected by Kimberly and her story -- that they don't forget her.
Posted by Rev. Dr. Megan Rohrer at 3:21 PM